Say what you want to say about Michael Bay’s live-action Transformers films but you cannot deny that it is a box-office juggernaut that is here to stay. While the last movie Transformers: Age of Extinction and the second film Revenge of the Fallen were massive duds, I kind of enjoyed the first and the third movie as brainless popcorn flicks despite their shortcomings.

Transformers: The Last Knight starts off with a flashback and reimagining of King Arthur and the Knights of the Round Table, in which Merlin’s ‘magic’ was gifted to him by a group of Transformers who have hidden themselves on Earth. This technology given was a grand contributor Arthur’s heroics and the parties involved made a pact to keep Transformers existence on earth a secret. The movie then flashes forward to the aftermath of Transformers: Age of Extinction, where we see Cade Yeager (Mark Wahlberg) who is now a fugitive and has limited contact with his daughter. He now has and the autobots trying to survive without Optimus Prime (Peter Cullen) who left Earth to find his creator. They are now fugitives and on the run from   Transformers Reaction Force- a global human organization that is dedicated to hunting and destroying Transformers regardless of whether they are Autobots or Decepticons. 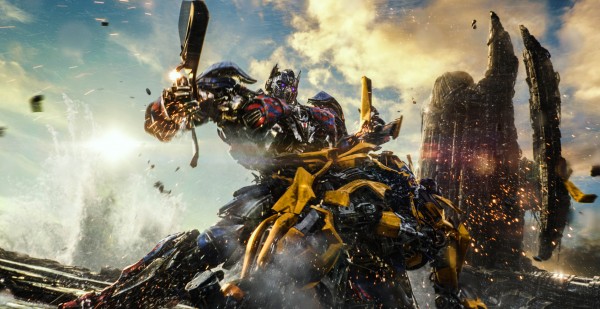 Optimus Prime ( Peter Cullen) and Bumblebee duke it out !!

During one of their routine missions they find Izabella (Isabela Moner), a young girl who was orphaned during the climatic battle that took place in Chicago (this happened in Transformers: Dark of the Moon) . During the rescue mission they Cade meets an ancient Cybertronian, who with his dying breath gifts him with a mysterious talisman that has a connection to the transformers’ secret history on Earth over the ages and the earth itself. This discovery gets the attention from astronomer and historian, Sir Edmund Burton (Anthony Hopkins) who is a member of a society that is dedicated to protecting these secrets. He also enlists the help of Viviane Wembly (Laura Haddock) a professor at the university of Oxford who is not aware she has a huge role to play in the battle coming ahead. Whilst they learn about what is coming ahead the TRF strike a bargain with the Decepticon leader Megatron (Frank Welker) and his fellow Decepticons to strike down the Autobots during their mission to find the secret technology that can save or destroy the planet humanity and Transformers-kind alike.

The Last Knight is marked as the last time where Michael Bay will take helm as the director (assuming they don’t give him a briefcase of dollar bills) and the last time Mark Wahlberg and Josh Duhamel (who has been in the series since the first film) act in a transformers movie. It is also acting as a launch pad to a second phase of films and spin-offs plotted by the Transformers writers group to expand the live-action series of films into another full-blown cinematic universe. With that said is The Last Knight a good enough film to remove the sour taste that Age of Extinction left in our mouths and finish Bay’s run with the legendary Hasbro franchise with a bang?

Transformers: The Last Knight is a better effort than its predecessor but it’s unfortunately a hollow, loud and formulaic action flick that  refuses to grow up with its contemporaries and it also one that ultimately fails to shake things up.