The Marvel Cinematic Universe’s success has created a dangerous precedent in the world of cinema. Studios are now trying to create shared universes for characters they own or have the rights to and many are failing in spectacular fashion like Sony’s now abandoned Amazing Spider-Man series and the DC expanded universe of films which have not set the world alight. Legendary Pictures is now the latest competitor in the ring as its currently trying to concoct a MonsterVerse around famous movie monsters like Godzilla which was recently rebooted in 2014 and the film we are talking about today Kong: Skull Island, both of which will act as the launch pad to this new shared universe the same way Robert Downey Jr. ‘s Iron Man films did with Marvel Studios.

King Kong has been a staple of cinema history. Since his debut in 1933, Kong has made his mark on popular culture and has had several spin-offs, remakes which, includes the Peter Jackson’s 2005 epic that was a critical and financial success. It was only a matter of time before the King was resurrected to cause havoc on silver screen once again.

Abandoning the source material, Kong: Skull Island is a reimaging of Kong Lore as the infamous Skull Island is now discovered in a 1973 America where the US military begins to formally withdraw their troops form Vietnam. This time round this reboot doesn’t follow a maniacal director and his obscure cast but a struggling government organization known as Monarch, who gets wind of satellite photos that have uncovered the uncharted Skull Island, a location that is very inaccessible and hidden from humanity due to the stormy clouds that surround it.

Monarch workers William Randa (John Goodman) and Houston Brooks (Jason Mitchell) quickly assemble a team to explore the island and chart what life forms reside there under the disguise of a geological team conducting a survey of the landscape. The team in question has War Photojournalist Mason Weaver (Brie Larson), former SAS Captain/expert tracker James Conrad (Tom Hiddleston) and the Sky Devils helicopter squadron, led by one Lt. Col. Preston Packard (Samuel L. Jackson). As the team arrives on the island they come face to face with King Kong who decimates a good chunk of the infantry and choppers that arrive on the island. Upon surviving an early skirmish with the leviathan the team are about to realize that he is not the only threat they are about to face.

Kong boasts an impressively talented ensemble of performers that includes the likes of Tom Hiddleston, Brie Larson, Samuel L. Jackson, John Goodman, John C. Reilly, Toby Kebbell, Corey Hawkins, Shea Hawkins and many more under the direction of indie darling Jordan Vogt-Roberts whose resume includes the well received The Kings of Summer. This movie has all the required pieces to make a classic monster movie that we could be talking about for ages. 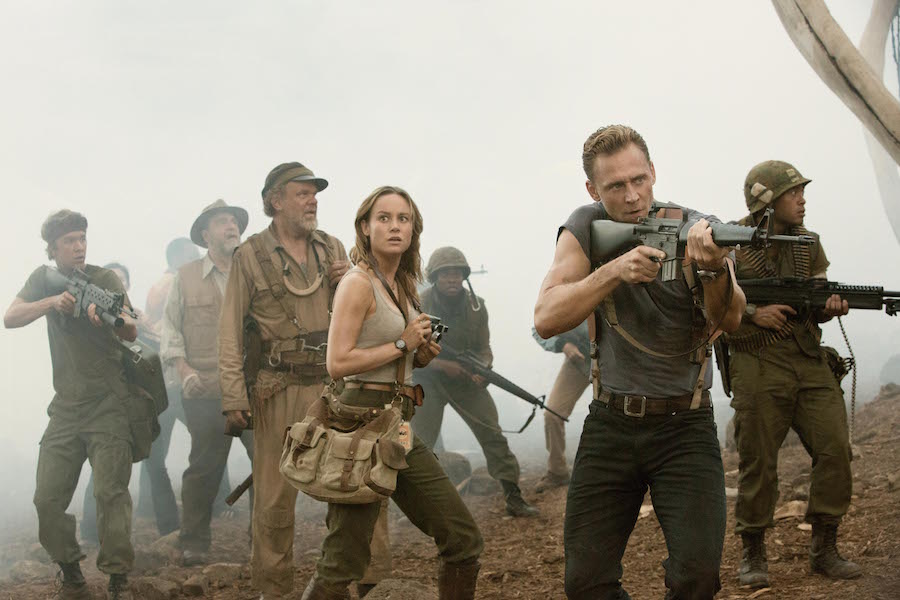 The film has an impressive cast but they are mostly forgettable characters.

There are some cool looking monsters on display.

The movie boasts has some cool visuals

Kong: Skull Island is a conceptually brilliant monster movie that fails to reach up to its lofty expectations due to its inability to utilize its amazing cast, its undeveloped characters and some odd visual blemishes that hurt the overall experience. Despite these flaws, Kong is still King thanks to an  intriguing Vietnam-style backdrop, amazing action sequences with the Gorilla and some cool monster designs that scream B-movie goodness.