I CARE A LOT 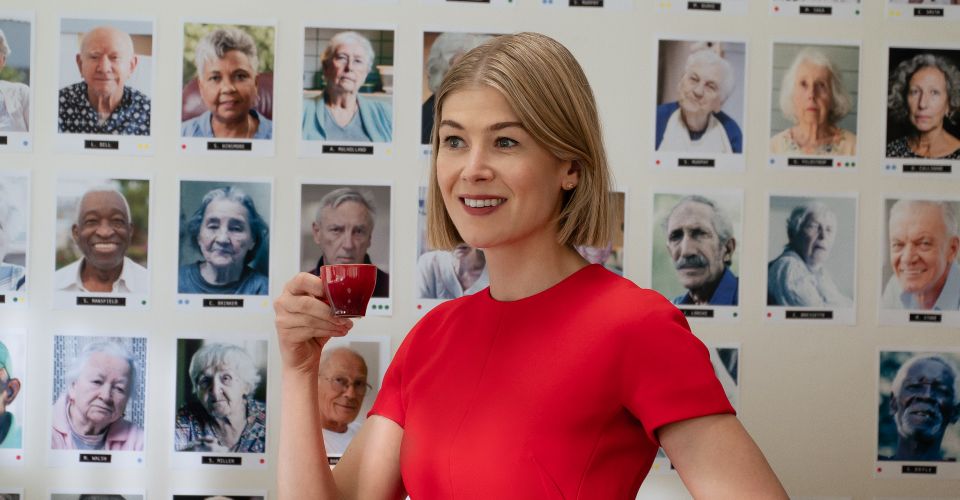 Written and directed by J Blakeson who worked on films like The Disappearance of Alice Creed and The 5th Wave, I care a lot follows Marla Grayson (Rosamund Pike), a very persuasive but extremely shady court-appointed legal guardian who makes her living with her partner Fran (Eliza González) by taking advantage of the elderly and their loneliness. They send them into care homes, severing all contact to the outside world, selling their homes and assets, and keeping the earnings. Marla’s despicable operations get her into serious trouble when she falsely testifies that a wealthy single retiree Jennifer Peterson (Dianne Wiest) is mentally unwell and unable to take care of herself. Upon her successful application for guardianship, Carla takes advantage of Peterson by moving her to a care home and attempting to sell her belongings which include valuable diamonds. Unbeknownst to Marla, Jennifer is linked to a former Russian mob boss Roman Lunyov (Peter Dinklage) who is prepared to kill her when he learns that Carla moved her to a care home and is trying to make money by selling her items. Her encounter with the mob will put her back against the wall and force her to play even more dirty to get the upper hand in this precarious ordeal.  The question left to answer is whether the film premise and performances are good enough to keep its audience to their seats.

I care a lot is an adrenaline-charged thriller with heavy themes on its sleeve. It comes swinging with a great performance from Rosamund Pike and her supporting cast despite having an indecisive tone. Worth a watch.

I CARE A LOT

Olisa Nwokedi - Olisa is an Aberystwyth University law graduate and Fordham University School of Law Masters graduate who was admitted into the Nigerian Bar in July 2016. He enjoys writing, watching movies, playing video games, and watching and participating in sports.
Previous